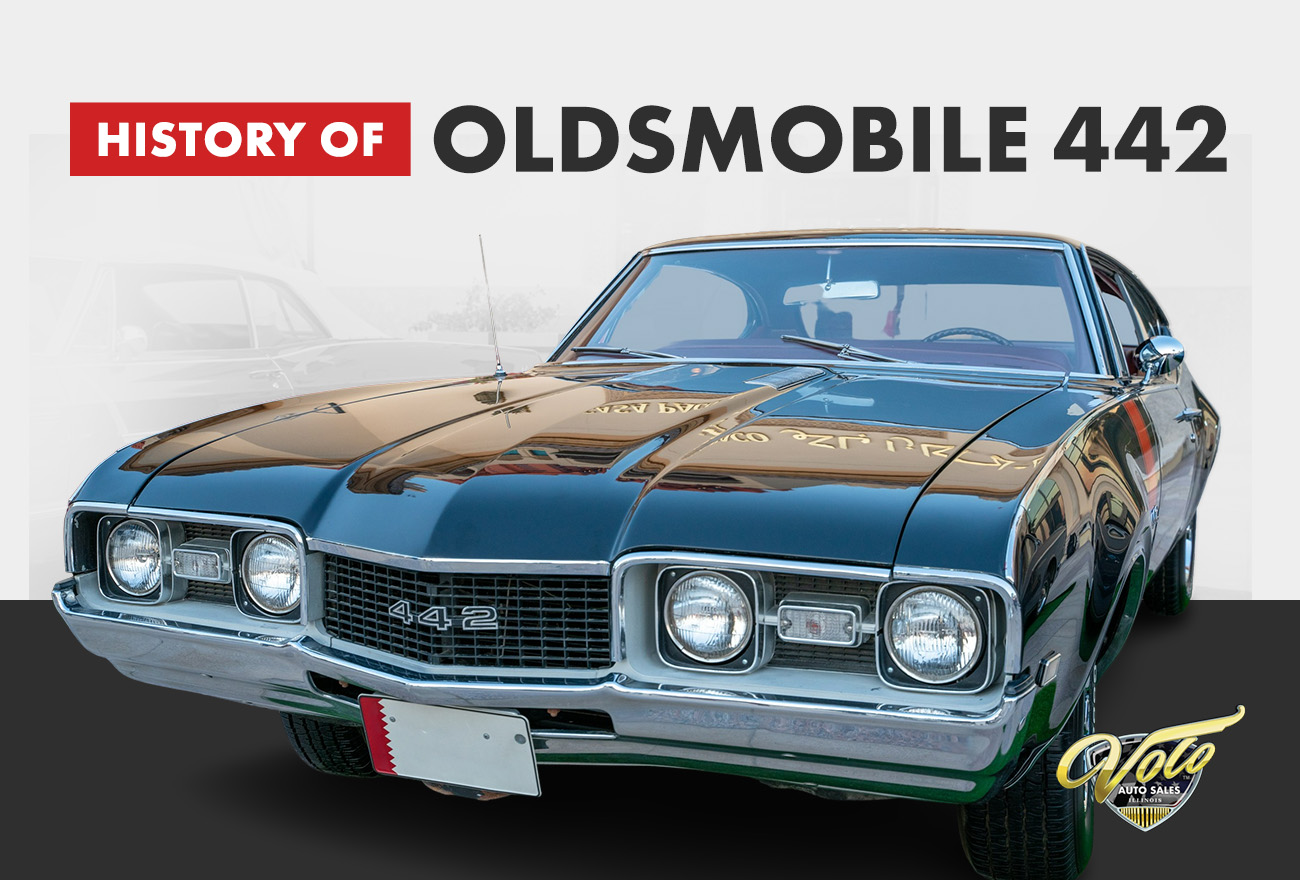 Known for its balanced handling, impressive performance and elegant styling, the Oldsmobile 442 is a staple of car history and continues to intrigue collectors today. It gets its name, “442,” from how it was built — a four-barrel carburetor with a four-speed manual transmission and dual exhausts.

The design itself would change over the years, but the name 442 stuck. It continued to evolve over six generations and several decades, improving performance and enhancing designs.

The first- and second-generation 442 Oldsmobiles provided some of the most classic versions. These were powerful vehicles renowned for their great handling and drivability. It started in 1964, with Oldsmobile looking to create something to compete with the GTO.

The 442 started as an option package for Oldsmobile's F-85 and Cutlass models and soon become its own beloved line. Oldsmobile was looking to create a rival to Pontiac's GTO. To do this, they took one of their best engines — a 330 cylinder V8 — and put it in their midsized Oldsmobile. The big engine gave the vehicle outstanding performance while retaining its muscly, sinewy styling.

Due to a misaligned promotional campaign in its introductory year, the Oldsmobile didn't sell very well. It would take another year before people really discovered this vehicle's advantages.

In 1965, the engine was replaced with a 400-cylinder, making the vehicle live up to its name. The upgrade made the car more powerful, and a series of additions — shock absorbers, springs, a clutch, a battery, front and rear stabilizer bars and fat tires — balanced the car out and propelled it to become one of the best handling cars on the market.

With a new 442 badge on its exterior and a new, energetic marketing campaign at its back, this new Oldsmobile sold much better than its predecessor. It was a balanced performance vehicle that proved itself as a mainstay in the auto world for years to come.

1966 is one of the most memorable years of the Oldsmobile. Its styling, performance and balance were all operating at a peak, and it was the last year before government regulations started to limit designs.

Suspension upgrades made the handling even better for the Oldsmobile 442, and critics in the auto world touted it as the most balanced muscle car on the market. The engine was upgraded to generate a bit of extra horsepower, and new options came available, including five transmissions and eight axle ratios.

1967 brought a new set of challenges — just as soon as Oldsmobile had rolled out their new triple carburetor options, GM banned them. In turn, Oldsmobile sought to find new options for drivers. They unveiled the L66, a 400-cylinder engine with a two-barrel carburetor.

The more popular option was the W-30, which had returned with a “forced-air induction system" — special air ducts, powerful springs, a camshaft, a fan shroud, an air induction cleaner and chrome valve covers.

This year changed everything — the 442 became its own model line. Still maintaining its original Oldsmobile A-body frame, the vehicle was upgraded with new sheet metal and also lost 3 inches on its wheelbase.

The big upgrade this year was the introduction of the Hurst/Olds, which remains one of the most sought-after versions of the 442 to this day. In a wildly successful collaboration between Hurst and Oldsmobile, the two took a 442 and added a 455-cylinder V8 engine. All models came in Peruvian Silver with black accents stripes.

At the time, GM prohibited putting engines over 400 cubic inches in mid-sized vehicles. Oldsmobile got around it by claiming that Hurst was actually the one installing the engines. The combination of power and compactness, muscle and speed, paired with the elegance of its design, made it a 1968 hit.

The 1968 Hurst/Olds are extremely rare — GM only produced 515 of them. Collectors today are still hunting down the last remaining versions of these classic vehicles. The Hurst/Olds would be brought back time and time again in future Oldsmobile 442 product lines.

The Hurst/Olds returned for this model year, featuring a new gold and white color scheme, hood scopes and a detuned engine. Some claim that the 1969 version of the Oldsmobile 442 was the fastest to ever hit the streets. In 1970, however, the true power of the 442 was unleashed.

Many Oldsmobile enthusiasts see 1970 as the peak year of performance for the vehicle — a time just before government regulations set in and turned the car performance industry on its head.

In 1970, GM got rid of its rule banning engines over 400 cubic inches from smaller vehicles. Now, all 442s came equipped with the powerful 455-cylinder V8 and Hurst/Olds were dropped from the lineup for the moment.

The W-30 option also reached its pinnacle with various upgrades. A fiberglass hood, decreased sound insulation, plastic inner fenders and an aluminum differential carrier and cover made the vehicle light and speedy. The low-restriction exhausts and forced-air induction system made performance even better.

A new option called the Rallye 350 was also offered, featuring a 350-cylinder engine and a bright yellow exterior. 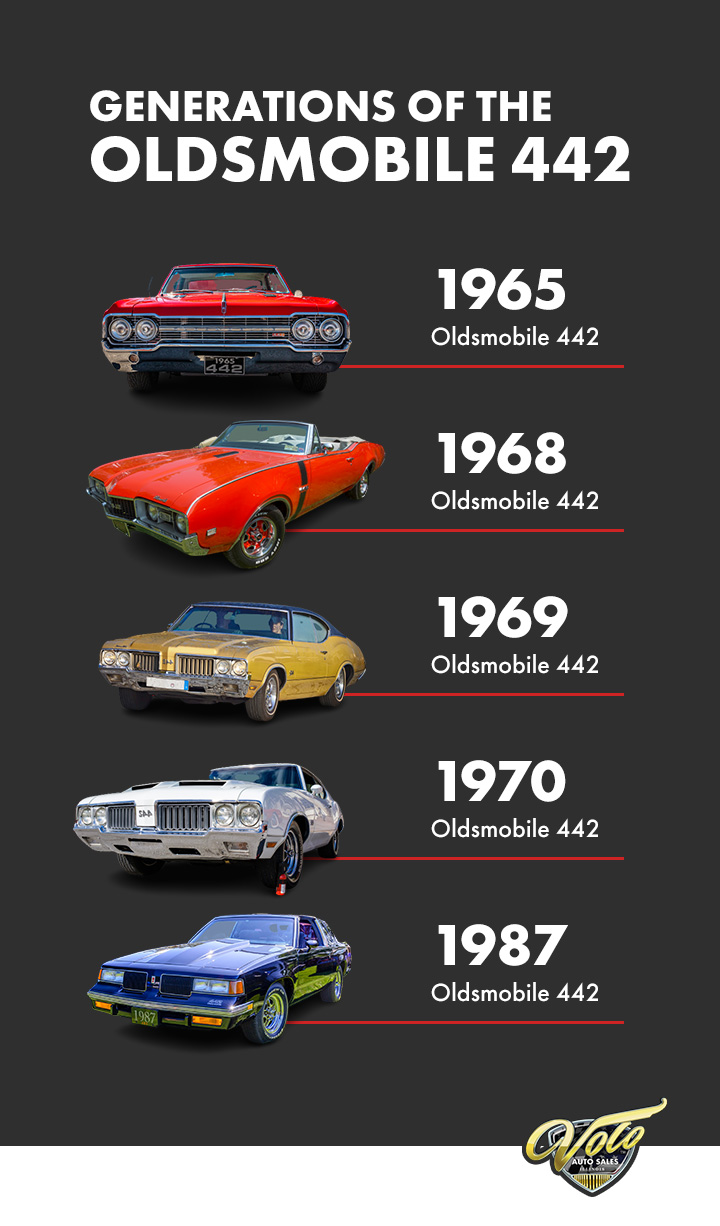 GM cracked down on performance standards, issuing a decree that all vehicles must be able to run on unleaded fuel. The overall move towards fuel efficiency in the United States also impacted the power of the Oldsmobile, decreasing horsepower. Oldsmobile dropped the Rallye 350 and the W-31, and Hurst/Olds were still off the market, but the W-30 was still available.

In 1972, Oldsmobile returned to its origins, reverting back to an option package on the V8 Cutlass. It was essentially an appearance package that included heavy-duty suspension and wheels.

Although performance was hampered, there were still options for those who wanted to relive the glory days of Oldsmobile. Hurst/Olds returned in 1972 along with the W-30 option.

As performance started to dip, the Oldsmobile 442 still survived as appearance and balance options. It was a testament to its success that the Oldsmobile continued to be offered into the next decade and beyond. Major exterior changes met the 442, evolving through various color schemes and aerodynamic style changes.

Ultimately, these generations found themselves trying to find their place amongst the increasing regulations of the era.

1973 marked a complete redesign of the Oldsmobile 442. It remained an option — known as the W-29 — exclusive to the Cutlass lineups. The Oldsmobile Cutlass had all-new sheet metal and a foreign appearance. The 442 operated mostly as a handling and appearance package.

Although the W-30 option was dropped, the Hurst/Olds returned, available in Ebony Black or Cameo White with gold stripes and a white vinyl roof. More emissions standards meant that the horsepower for the Oldsmobile 442 continued to decline.

It remained an appearance package to the Cutlass. Flush taillights and a newly-designed grill met the new 1974 442, and power steering and vinyl interiors became standard. The W-30 code came back with the new 230-horsepower Rocket 455.

This year marked the end of the dual exhausts in the 442. Instead, it switched to a six-cylinder engine to keep up with the fuel-efficiency economy.

Little changed in the 1976 year except for some exterior changes — a new sloped nose for aerodynamic effects, split grilles and rectangular headlights.

1977 was the last year the 442 would feature the Colonnade body. The top engine for this year was the 403 cubic-inch Rocket V8, putting out 180 horsepower.

Limited edition versions of the 442 and Hurst/Olds were available in these years. Different trim elements and colors were offered as the focus shifted away from performance towards more appearance options.

The final generations of the Oldsmobile 442 involved several different designs and options that renewed interest in the classic car. The Hurst/Olds was brought back, along with the “W” options that had been so popular.

Although it continued to be popular, these generations also saw pauses in the production of the 442s. It would return with new designs while staying true to its name. Eventually, the Oldsmobile 442 name would finally be retired forever in the early '90s.

In the new generation, Oldsmobile sought a return to its performance standards. It included a larger 350 V8 engine with W-30 badging. Although Oldsmobile dropped the 442 option from 1981 to 1984, the Hurst/Olds made a return in 1983 and 1984.

The 442 returned true to its name, although this time a little different — a four-speed automatic transmission, four-barrel carburetor and two exhausts. The Hurst/Olds was replaced with the W42 name. The shifter moved to a mount on the floor between the front seats, and a new F-41 suspension package was included.

After a few years of drought, the 442 returned once more, this time on the Quad 442 front-wheel drive Cutlass Calais. It was a four-cylinder engine with four valves on each cylinder and two camshafts. This new model year also played on the classic W-30 option, naming the new lineup W-40 with an additional performance option called the W-41. The W-41 had 190 horsepower and a different five-speed transmission.

After that, the 442 name was retired forever. It was the end of a long and fruitful run for the Oldsmobile 442, which started as a rival to the Pontiac GTO and soon evolved into its own revered creation.

From its origins as the trusted, balanced handling vehicle to its glowing performance reviews in 1970, the Oldsmobile proved itself to be a favorite of car enthusiasts and a big part of GM's history.

The Oldsmobile 442 is a classic vehicle with a rich history. Through its various decades of success, there is a lot of information to absorb. Here are some common questions about the Oldsmobile 442.

The “Olds 442” refers to the Oldsmobile 442. Its name comes from its unique design — a four-barrel carburetor, four-speed manual transmission and dual exhausts. This style created a powerful, balanced vehicle that was one of the premier muscle cars of the day.

In later years, the design changed, as designers opted instead for a four-speed automatic transmission. Though it was different from its original design, it still reflected the 442 name.

How Much Is an Oldsmobile 442 Worth?

The value of the Olds 442 is different based on the year of the car. The more classic versions, for example, will likely go for more because they have boosted performance and historic qualities. Some may go for hundreds of thousands of dollars.

A 1970 Oldsmobile 442 is worth quite a bit since enthusiasts often regard this as the peak of performance of the Oldsmobile. Other models, such as the 1968 Hurst/Olds, are highly sought-after due to their limited production.

During this time, some companies may have downplayed the actual power of the engine — this 442 might've had over 400 horsepower.

At one point during the 442 run, the W-30 essentially became an appearance package. Still, drivers bought these cars merely to relive some of that classic feel and bask in the nostalgia of the great 442 years.

Find Your Dream 442 at Volo

The Oldsmobile 442 is an extremely popular car among collectors and car enthusiasts. It appeals to many different types of car collectors due to its renowned handling, performance standards, elegant, muscley styling and historic attributes. Today, many collectors want to get their hands on one of these cherished 442s.

While researching and looking at these Oldsmobile 442s is enjoyable, it can be an entirely different experience to own one. You can get behind the wheel and feel the classic power of the 442's engine, its impeccable handling and its light, aerodynamic designs. The challenging part can be finding a dealer who can offer one of these amazing vehicles.