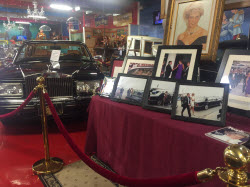 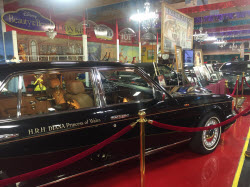 VOLO — It was just a Tuesday through Thursday in June. But oh, for Diana fans, what an amazing few days they were.

Princess Diana visited Chicago 20 years ago this June, and throngs of people came to catch a glimpse as the statuesque blonde made her rounds — speaking at a symposium at Northwestern University, visiting the sick and wounded at Cook County Hospital and attending a fundraising dinner.

The luxurious, chauffeured Rolls Royce transporting her royal highness was captured in numerous photos during the historic visit, June 4-6, 1996. The car, a 1996 black Silver Spur, and more than a dozen archival photos and documents are on a special, limited-time display at the Volo Auto Museum.

“This is not just any car, and not just any compilation of photos,” he said. “This car, all of the pictures, it’s all from that Chicago visit 20 years ago, her last on U.S. soil before her tragic 1997 death.

“We created a tribute video,” he continued. “It’s pretty moving.”

The museum bought the Rolls Royce when it became available in 2007 to preserve its place in history, Grams said.

“Few people have captured the public’s imagination the way that Princess Diana did,” he said. “I’m sure many who saw her during that Chicago visit consider it to be a highlight of their lives.”

The Princess Di Rolls is among numerous celebrity-linked cars that visitors to the Volo Auto Museum can see. In addition to hundreds of classic, muscle and Hollywood cars, displays at the museum now run the gamut from vintage tractors and bikes to an evolution of transportation exhibit and rare Disney novelties.

Suggested caption: The historic 1996 visit of Princess Diana to Chicago is commemorated in a special, limited-time exhibit at the Volo Auto Museum, 27582 Volo Village Road. Featuring the Rolls Royce that transported the Princess of Wales throughout her visit as well as numerous photos and a video tribute, the exhibit will close June 7.