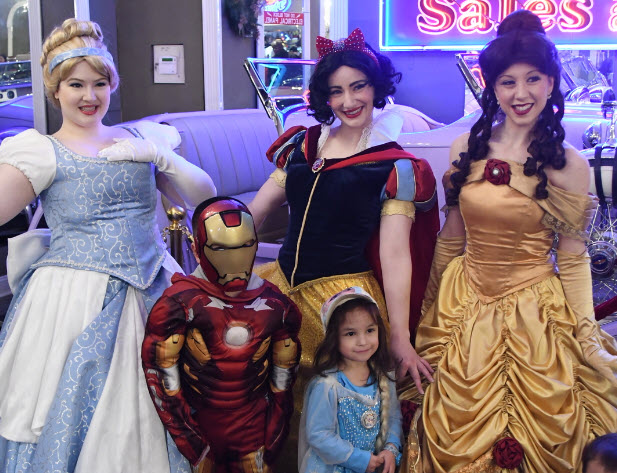 VOLO — Due to public health concerns over COVID-19, the Volo Auto Museum will voluntarily close to the public for two weeks starting Tuesday, March 17.

However, the popular Princesses and Superheroes spring break event hosted by the museum since 2014 will go on — virtually. Museum Director Brian Grams said he hopes the now-planned Facebook Live version still will bring smiles to its participants — and dollars to its designated beneficiary: Ronald McDonald House Charities of Chicagoland and Northwest Indiana.

“We are going to do our Princesses and Superheroes event via Facebook Live,” Grams said Monday, shortly after a staff meeting at which the imminent, temporary closure was announced. “We have between 20 and 30 Superheroes as well as princesses who plan to come out, and we’ll take people on a fun, free virtual tour of the museum.”

During the event, Superheroes such as Batman and Robin along with Star Wars characters, Ghostbusters and others typically mingle with museum visitors as they hang out near their corresponding film-famous cars. This year, starting at noon Sunday, March 22, characters instead will interact with those clicking in on their devices.

The event is run in conjunction with Costumers With A Cause, a group of volunteers who enjoy cosplay and participate in child-centered fundraising.

Grams noted that the children Ronald McDonald House Charities serves are among those particularly vulnerable to the virus now affecting people around the world. He and David Purkey, Costumers With a Cause Midwest Branch co-leader, said they hope people will enjoy the Facebook Live event, and that viewers will be inspired to visit rmhccni.org to donate.

“We try to put smiles on the faces of children who are going through tough times,” Purkey said. “With a lot of children out of school right now, here’s a fun activity that they can follow along with from home.”

Grams noted that while the museum at 27582 Volo Village Road will be closed to the public, employees still will earn paychecks during the unprecedented closure.

“In 60 years, the museum has never been closed for more than a day at a time for holidays like Christmas, Thanksgiving and Easter,” Grams said. “We encourage everyone to join us for the virtual tour March 22, and to come see us when we reopen.”

Current plans are to reopen April 1. More information is available at volocars.com.

Princesses: Princesses and costumed tykes pose for a photo in the Duesenberg Room at the Volo Auto Museum during last year's Princesses and Superheroes spring break event. This year, due to a voluntary facility closure, a free virtual tour is planned — complete with costumed characters — via Facebook Live from noon until roughly 2 p.m. Sunday, March 22.

costumed.kids: The Volo Auto Museum's Princesses and Superheroes Day has been a spring break favorite for families since 2014. This year, due to a voluntary museum closure in conjunction with efforts to mitigate the spread of COVID-19, a free virtual tour is planned via Facebook Live from noon until about 2 p.m. Sunday, March 22. To join in, find the Volo Auto Museum on Facebook.