Year of the Tucker celebrated at Volo Auto Museum 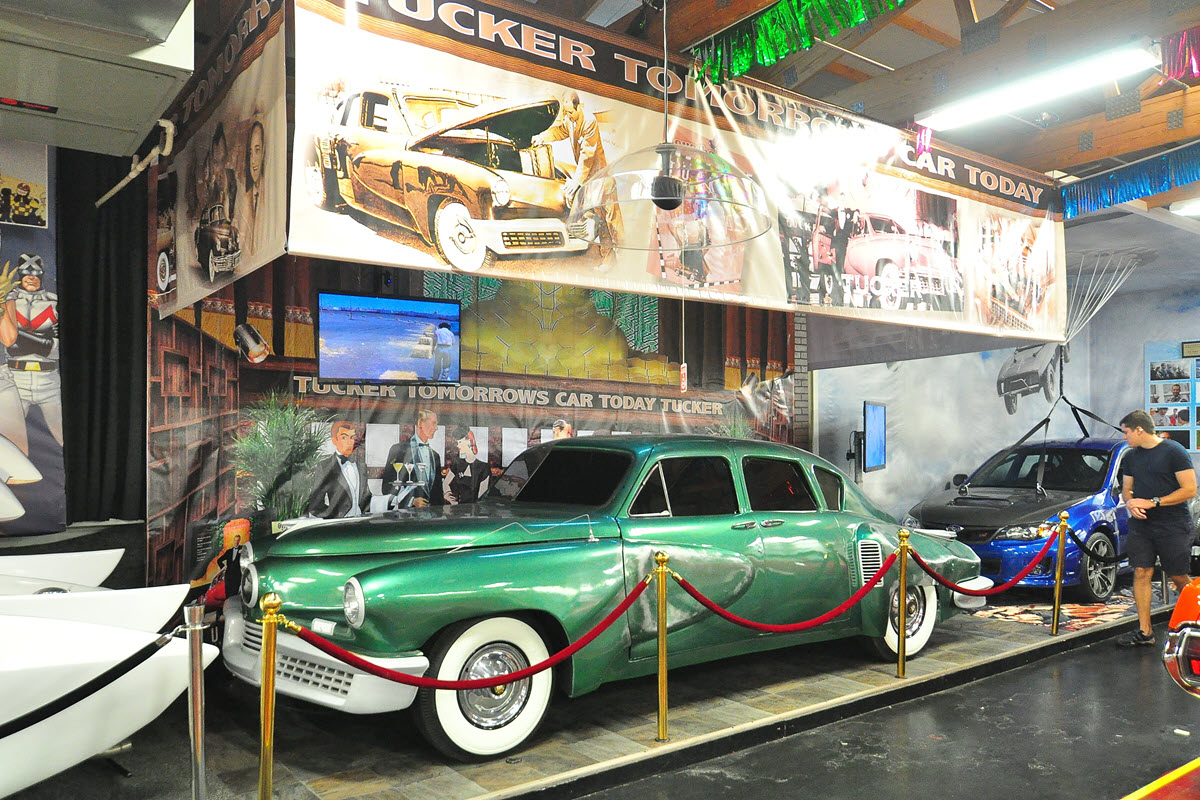 Year of the Tucker celebrated at Volo Auto Museum

VOLO — Seventy years ago, a visionary rocked the U.S. auto industry. Thirty years ago, filmmakers memorialized him. And today, the Volo Auto Museum honors the legend.

The new Tucker display in Showroom 2 pays homage to the spectacular rise and fall of Preston Tucker, who took on the Big Three automakers back in the late 1940s to launch a wildly popular — but short-lived — independent brand. With much fanfare, Tuckers were introduced to the public in the summer of 1948. But the Chicago-based factory was shuttered just months later, and only 51 of the cars were ever built.

Forty years later, in August 1988, the movie “Tucker: The Man and His Dream” hit theaters. The Academy award-nominated movie starred Jeff Bridges and featured the story of the man who produced one of the most iconic cars Americans had ever seen, only to see his dreams smashed as powerful Congressmen and leading automaker executives launched a smear campaign.

The Volo Auto Museum is now home to one of four exacting Tucker replicas built for the movie, said Brian Grams, director of the museum at 27582 Volo Village Road. The museum is celebrating the 70th anniversary of the car and the 30th anniversary of “Tucker: The Man and His Dream” with a brief display of the rare movie car.

“Our car was the one used during the vehicle test-run scene,” Grams said. “As the car comes around the track, it rolls over and crashes. But the characters celebrate because the safety features they put in the car, like a pop-out windshield, worked as planned.”

The museum’s screen-used Tucker still bears the dents and dings of that wipe-out. The highly stylized green sedan is displayed in an exhibit with historical references to its real-life counterpart’s futuristic marketing campaign.

The car features a center headlight, large whitewall tires and that unmistakably sleek silhouette that customers of the ’40s were clamoring for before Tucker’s fortunes turned due to negative publicity regarding his capital-raising endeavors. From now through the conclusion of an upcoming eBay auction, museum visitors can glimpse this rare piece of movie and automotive history — 70 years after Chicagoans caught their first glimpse of the Car of Tomorrow.

The Tucker movie car is among about 30 items that will be auctioned off Sept. 19-25 in a no-reserve auction featuring everything from a rolling, motorized Lazyboy built for NASCAR to Natalie Wood’s ’63 Buick Riviera and a Duesenberg II estate car.

The Volo Auto Museum is open 10 a.m. to 5 p.m. daily. It features about 400 classic, muscle and Hollywood cars and more. Regular admission is $15 for adults, $9 for children ages 5 to 12 and free for children 4 and younger. For other information, call 815-385-3644, find Volo Auto Museum on Facebook or visit volocars.com.

Suggested caption: This exacting replica of a 1948 Tucker was used in the film "Tucker: The Man and His Dream," which debuted in theaters in August 1988. The Volo Auto Museum is celebrating the 70th anniversary of the legendary car (only 51 were built) as well as the 30th anniversary of the movie with a limited-time display in Showroom 2.