The History of Campers | How Campers & RVs Have Evolved

The RV is a classic symbol of travel and adventure. Whether you own one yourself or are interested in learning more about how a recreational vehicle managed to shape society, the history of RVs and campers provides a fascinating, unique look into America's past and present.

What Was the First Camper Ever Made? 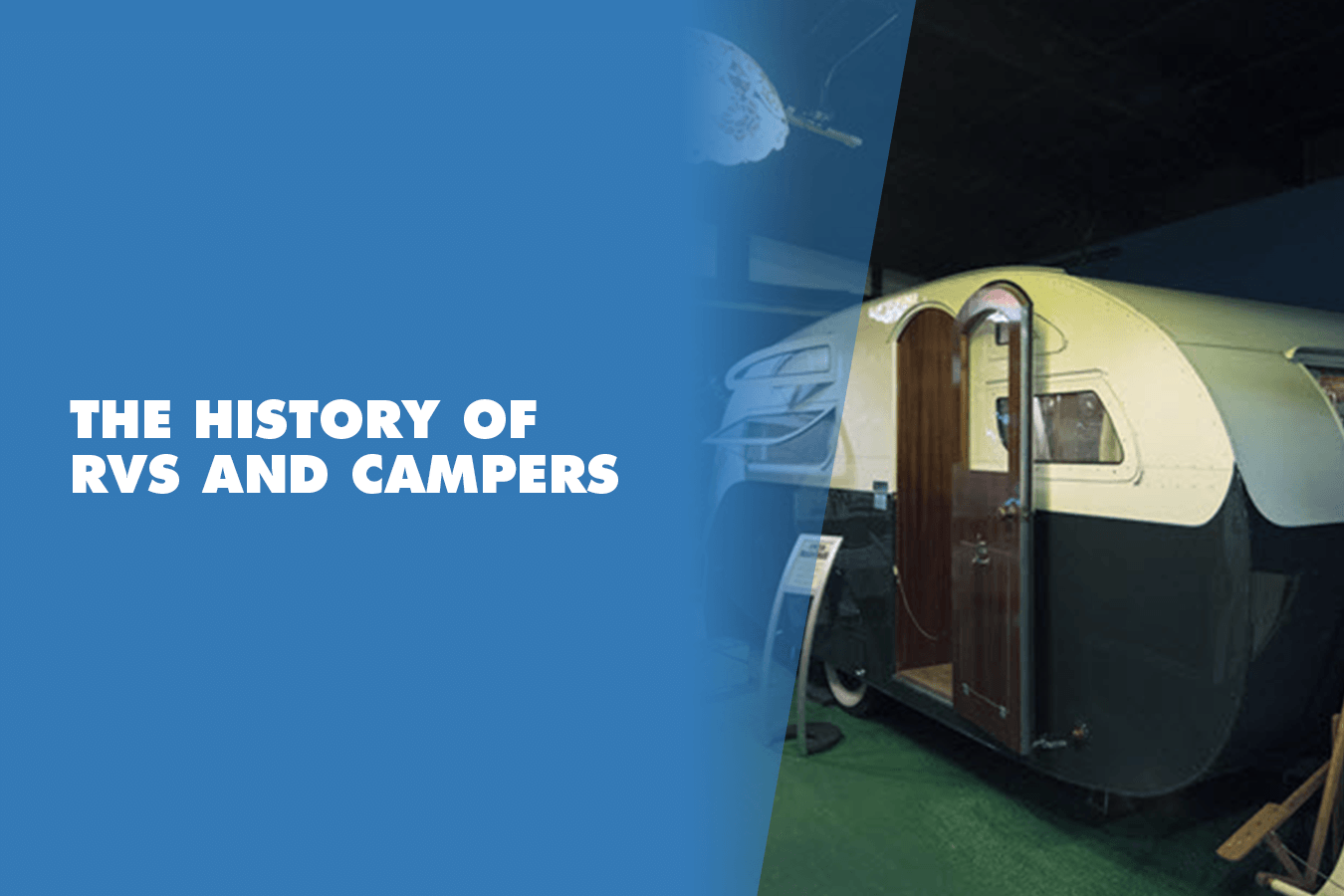 It's difficult to say when the RV was invented or who invented it. Many believe that early RVs were inspired by the traveling nomadic Roma Caravans that existed in Europe during the 1800s. The first production RV — Pierce-Arrow's Touring Landau — made its debut at Madison Square Garden in 1910. Although a few single-production RVs and campers existed before then, the Touring Landau is considered the moment when RVs entered mainstream culture. Complete with a telephone and toilet, the Touring Landau reflected concepts of luxury and comfort and was a true novelty of the time.

Five years later, Roland R. Conklin, of New York, made headline news when he took his 1915 Gypsy Van — custom-built to hold 11 people, including a shower bath and folding lavatory — on a cross-country trip with his family to San Francisco. The Gypsy Van was 25 feet long and weighed 8 tons. The interior included a full kitchen and a hidden bookcase.

When Did RVs and Campers Become Popular?

Although function and availability fluctuated throughout the history of motorhomes, the popularity of campers and RVs never diminished. Americans have always been fascinated by the practical and recreational lifestyle that RVs offer.

A Practical Way to Travel

Even after the automobile was invented and cars became more accessible to the general public, traveling long distances was a very challenging thing to do. Travelers often stopped alongside the road to sleep if there were no hotels available. In many cases, even if hotels were an option, they were too complicated or too expensive for the average traveler. There were also very few places to stop for gas or to grab a bite to eat.

Additionally, there were no GPS devices and few directional road signs, making it very easy to get lost. As a result, many people invested in a travel trailer or RV for practical reasons: to get from point A to point B more easily. Now, families and friends could visit one another across miles, and travel for business became a less costly and time-consuming endeavor. Once the camper trend caught on and people began to experiment with what they could use an RV for, as well as what an RV could look like, practicality became only one component of many.

During the Great Depression, many could no longer afford to keep their house and car. Campers allowed people to live and sleep in their vehicles, cutting their expenses in half. Living in their cars also allowed impoverished families to travel across cities and states, seeking work. Several years later, recreational vehicle production paused due to the need to conserve trailers and supplies for World War II manufacturing. Once the war ended, however, RV production saw a drastic increase when returning soldiers sought a simple, inexpensive way to vacation with their families.

People have always been camping for fun, whether in tents or under the stars. As the RV trend caught on, many people began substituting their tents for covered, weather-safe campers that required no difficult setup or tear down. Soon, traveling groups emerged and started to rise in popularity. One of the most famous traveling groups to exist were the Four Vagabonds, which was a recreational camping group formed by Thomas Edison, Henry Ford, Harvey Firestone and John Burrough that traveled the country together. Their adventures became so popular that, after several years of media coverage, they ceased their expeditions due to the large, cumbersome crowds they were drawing.

By the 1960s and 1970s, travel to National Parks increased in popularity, music festivals became more widespread and people were traveling more for fun more than ever before, making recreational vehicles a permanent fixture in American culture.

The Evolution of the Camper

Campers and RVs have gone through significant changes since they became popular in the early 1900s. Some of the most iconic campers along the way include: 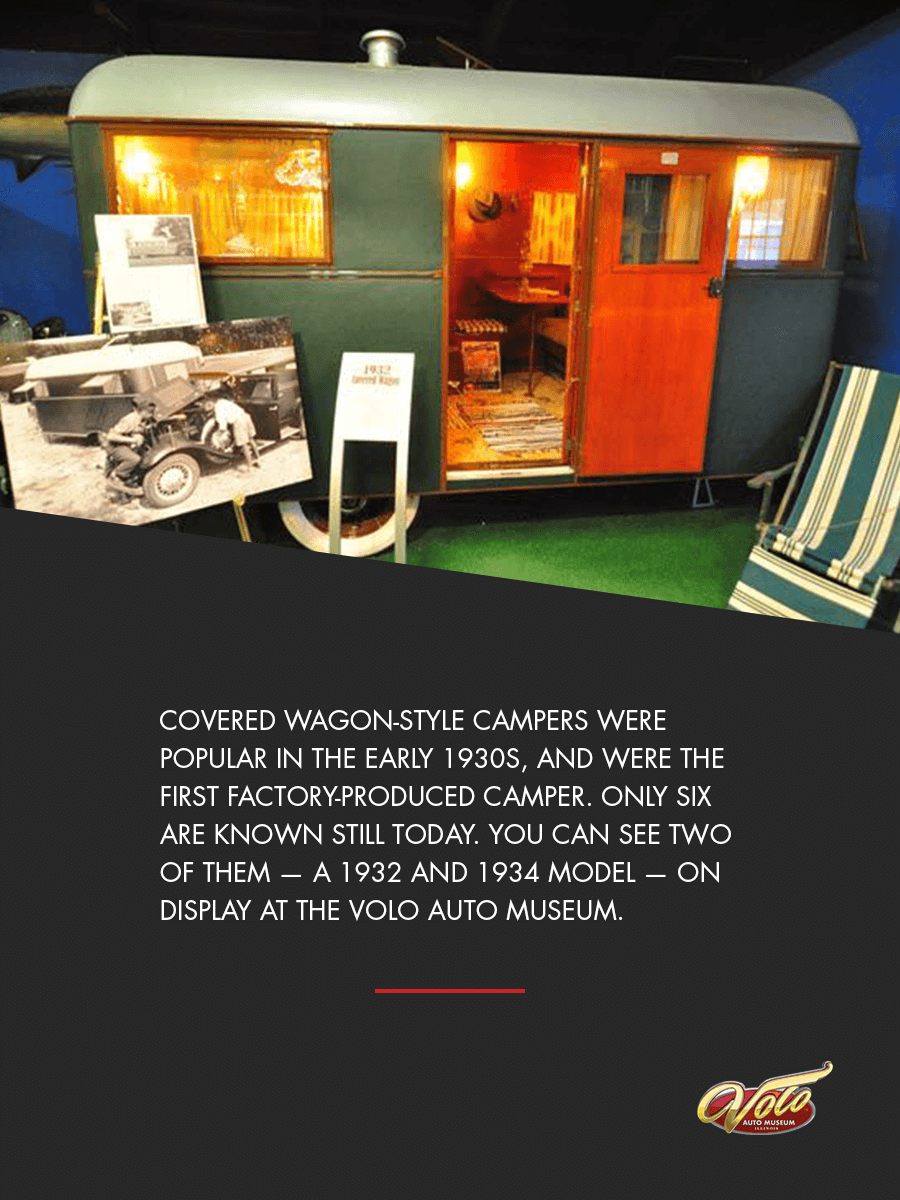 Today, modern motorhomes are divided by classes, and travel trailers are separated by the features they offer.

It is important to note that, although these modern campers are often more spacious and comfortable than their early counterparts, many travelers today prefer the look and feel of old fashioned rigs for their colors, simplicity and vintage style.

As technology has evolved, so have the furnishings and amenities inside of RVs. Old-school RVs rarely had plumbing, though some had features like telephones and woodburning stoves to heat the camper and cook food. Today, there is no limitation on the features you can choose for your camper, including televisions, air conditioning, showers, refrigerators, connectivity and more. Today's luxury RVs can sell for millions of dollars and come with features like king-size beds, multiple floors, built-in surround sound systems, fireplaces, rooftop decks, built-in e-centers and more.

Modern campers use their RVs for a variety of things, including:

For many, RVs have become more than a recreational vehicle — they have become a way of life. Some people have forged a living for themselves by documenting their experiences living in an RV. Retirees have given up large, empty houses for a simpler life on the road. Campers have revolutionized the way we attend festivals, fairs, events and reunions. Regardless of how they are used, it is clear to see that owning and using both modern and vintage RVs has become a symbol of freedom and a love for adventure.

See the History of RVs at the Volo Auto Museum

Learn more about the history of RVs and campers at the Volo Auto Museum, a 35-acre destination fit for the whole family and focus of the History Channel TV Series "Volo, House of Cars." Plan to spend your day exploring more than 33 unique exhibits, including antique kiddie rides, cars from TV shows and movies, a carousel museum and more. We curated our Auto Museum with families in mind, which is why you can enjoy a slice at our on-site pizza parlor or take in a show at one of our mini-theaters. The Volo Auto Museum is open year-round, rain or shine.