History of the Back to the Future DeLorean | DeLorean DMC-12

Who Made the DeLorean From "Back to the Future"?

Before the DeLorean became synonymous with the "Back to the Future" trilogy in the 1980s, it was the brainchild of John DeLorean who dreamed of putting his stamp on the auto industry. 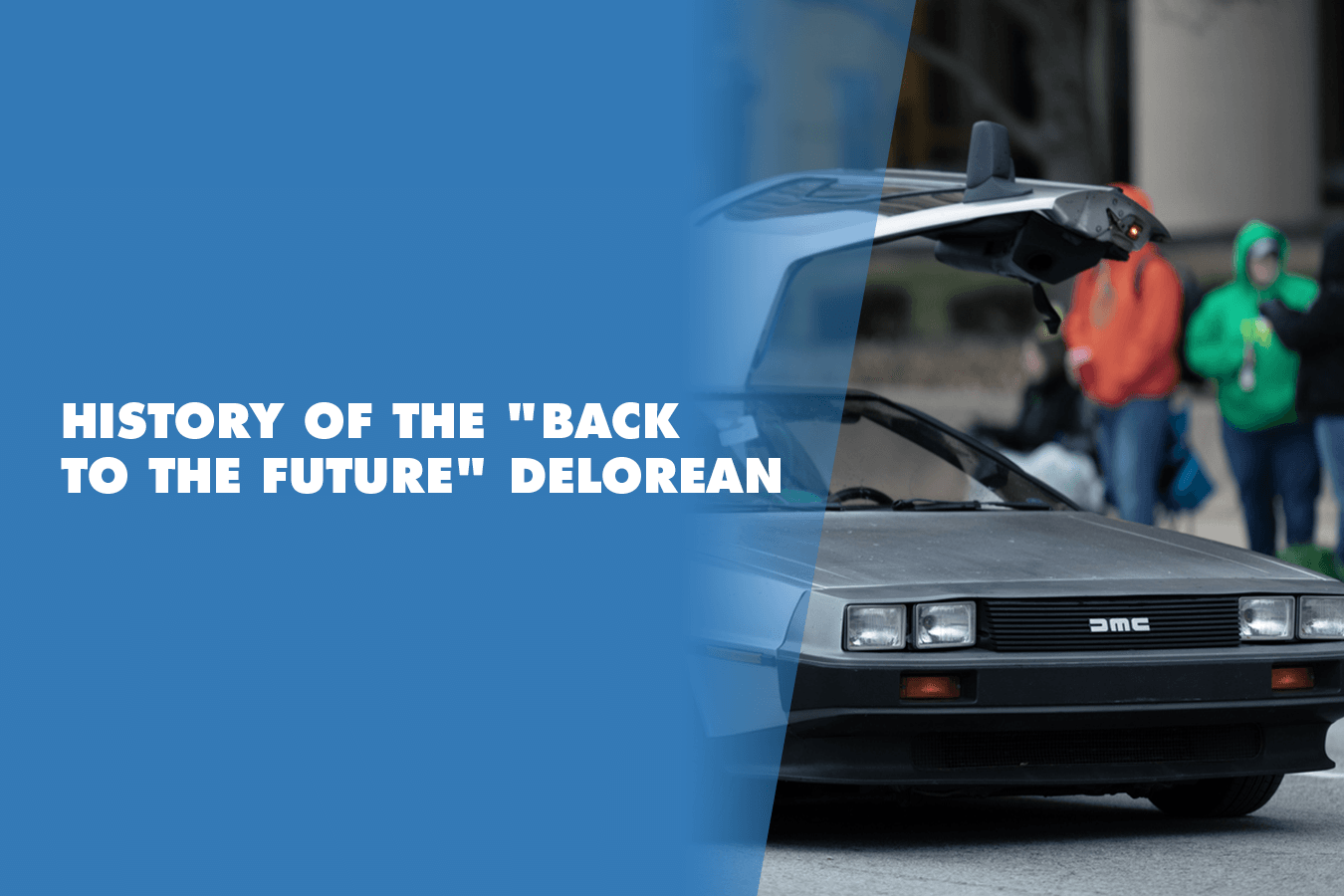 As the youngest division head in General Motors' history, Mr. DeLorean knew the power of well-designed cars. Instead of continuing to make cars for General Motors, he left his division head position and created the DeLorean Motor Company (DMC) to bring his dreams to life. This new company would end up creating the DMC-12, more casually known as the DeLorean.

History of the DeLorean DMC-12

Mr. DeLorean had high hopes that the DMC-12 would be a sports car that put DMC at the top of the auto industry. From the rear-mounted engine to the gull-wing doors and stainless steel, unpainted body, Mr. DeLorean knew he had designed something unique.

In his vision for the car, he saw himself building an ethical sports car that would be durable, fuel-efficient and safe. Stephen Wynne, currently CEO of the recently resurrected DMC and owner of the DeLorean inventory, thinks of the DeLorean as the Tesla of the past. As for Mr. DeLorean himself, Wynne reports that the man was a maverick, dedicated to blazing trails on his own terms.

To get the design of the car just right, Mr. DeLorean went to a prominent Italian designer, Giorgetto Giugiaro, for help with the car's shape. Drawing on a past 1970 concept car that he had done for Porsche, Giugiaro brought the DeLorean to life. The wedge-shape, stainless steel body and gull-wing doors would prove to be a stunning design, captivating the imaginations of consumers and "Back to the Future" audiences for years to come.

With the design solidly in place, Mr. DeLorean finished work on a prototype of the DMC-12 in 1976. The car originally featured a fiberglass chassis that was extremely resistant in a crash. To give the vehicle extra speed and power, Mr. DeLorean also designed the vehicle to be mid-engined.

By the time the vehicle hit the road in a model available to the public, the fiberglass technology had ended up being disregarded for a more conventional chassis. Along with changes to the chassis, Mr. DeLorean moved the engine to the rear, so the vehicle could incorporate a V6 powertrain motor into it. These adjustments would end up harming the vehicle's handling, which many still criticize today.

After sealing a deal to produce the car in Northern Ireland, Mr. Delorian wanted to sell the car for $12,000. This desired price-point became integral to the name of the vehicle offered to the public, the DMC-12. Despite the name, when the car eventually launched in January of 1981, it actually came with a $29,825 price tag. Though the price didn't stick, the name did.

Unfortunately for Mr. DeLorean, the launch of the DMC-12 was not met with great success. The cars were mired with production issues, with the newer versions of the cars constantly being modified to make up for unforeseen challenges, meaning that cars produced earlier were not as capable as those made last. Along with the varying quality, the DeLoreans suffered from a lack of power. The car's engine only offered 130 horsepower, meaning the car accelerated from zero to 60 in just over 10 seconds, which was much slower than the competition.

Even without exceptional horsepower, DMC kept the vehicle in production until 1983, as the vehicle's visual appeal kept it attractive to buyers. It did not make it past 1983, however, as Mr. DeLorean would be arrested in 1982 and have to face trial.

His arrest was due to agreeing to finance drug traffickers who needed his money to help them smuggle cocaine into the United States. He agreed to the deal out of the hope that he could use the money to provide his company with a much-needed cash injection. Unfortunately for Mr. DeLorean, the agreement was all fake, and the "drug traffickers" were members of the FBI who were conducting a sting operation.

Though Mr. DeLorean would eventually be acquitted due to a jury finding that the FBI had entrapped him illegally, the damage was already done. His company closed up shop, and the factory making his cars ground to a halt. In the end, only about 9,000 DeLoreans were ever built.

With things looking bleak, Mr. DeLorean got out of the auto industry. However, the car would go on to have a second wind when the "Back to the Future" trilogy hit the big screen.

The "Back to the Future" DeLorean

In 1981, when Robert Zemeckis and Bob Gale first began to write the "Back to the Future" script, they had a reconfigured refrigerator as their time-traveling device. By the time production for the film began in 1984, the refrigerator, thankfully, was changed to a DeLorean. 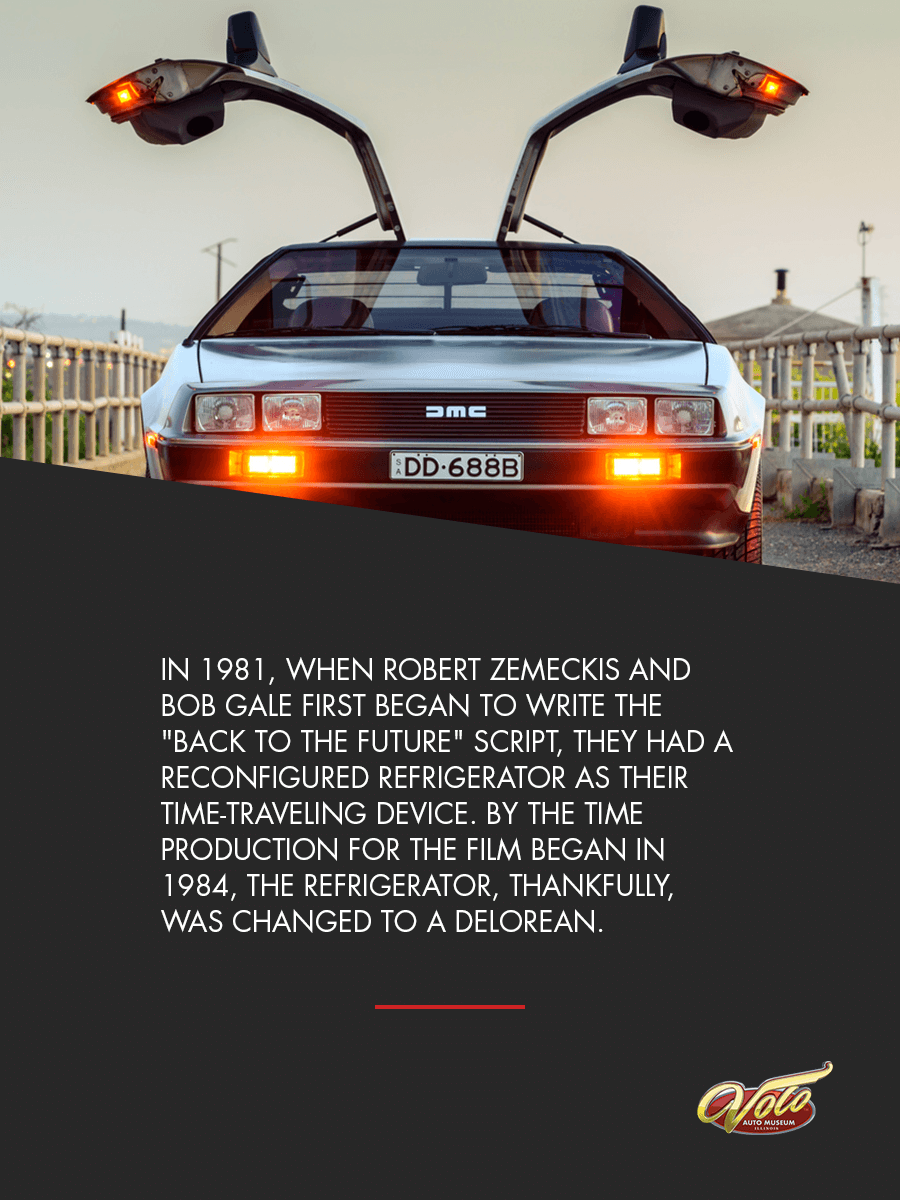 This change ended up turning the DeLorean into a legendary vehicle, allowing for Stephen Wynne to raise the Delorean Motor Company from the ashes in 1995. Along with bringing the DMC back, the movies have made the vehicles highly coveted by fans of the series, with replicas regularly going for over $100,000.

View Other Guides on Famous Cars:

FAQs About the "Back to the Future" DeLorean

With so much film lore and buzz surrounding this iconic vehicle, many fans are interested in the history of the "Back to the Future" DeLorean. Some commonly asked questions are:

How Many "Back to the Future" DeLoreans Were Made?

For filming purposes, the film's crew had three specialized DeLoreans built. The filmmakers used these three DeLoreans throughout the films, with the primary one used now on display. As the film only made minor adjustments to the vehicle, John DeLorean is still considered the person who made the "Back to the Future" DeLorean.

How Was the "Back to the Future" DeLorean Built?

The DeLorean featured in the "Back to the Future" films used the DMC-12 as its base, but the crew ended up modifying it to fit the needs of the films. One of the first parts changed was the engine. The filmmakers replaced the V6 Powertrain motor with a Porsche engine to help the car go faster.

To really sell the car as a time machine, extra blinking lights and aircraft parts were added to the vehicle. On Marty and Doc's trip to 2015 in "Back to the Future Part II," Doc Brown installed a repulsorlift flying unit. This feature allowed the wheels of the car to swivel 90 degrees and then deploy flight thrusters to take the vehicle into the air.

In addition to the flux capacitor, the time clocks were crucial to proper time travel. These clocks featured both the present time and the destination time in order to allow accurate time traveling.

What Does the DeLorean Run on in "Back to the Future"?

Later, the car would be further modified, so electricity from a lightning bolt could fuel the time machine instead of having to use the plutonium. When the car wasn't time traveling, it was just like any other car, using gasoline to power it.

How Fast Did the DeLorean Have to Go?

In the films, the DeLorean had to reach 88 miles per hour to reach the speed required for time travel. The only problem was that the standard DeLorean's speedometer only reached 85 miles per hour due to a law signed by Jimmy Carter that capped speedometers.

While the regulation may have been well-intentioned, it meant that that the film crew had to do some extra work. The filmmakers decided to swap out the DMC-12's speedometer for one that could display a higher speed. With the upgraded "Back to the Future" DeLorean, a new speedometer was added that reached 95 miles per hour.

What Color Was the DeLorean in "Back to the Future"?

The stainless steel look of the DeLorean was perfect for a futuristic, time-traveling machine, so it stayed the same.

What Could the DeLorean in "Back to the Future" Do?

Unlike the standard DMC-12 on the road, the "Back to the Future" DeLorean could time travel. In the trilogy, this ability is originally shown in the first "Back to the Future" when Doc sends his dog, Einstein, into the future by one minute. After seeing the dog arrive successfully in the future, Marty and Doc would use the car to travel forward and backward in time across all three movies.

Though time travel was the main feature of the vehicle, the filmmakers would eventually give the car the ability to hover and fly. This ability was gained after traveling to 2015 in "Back to the Future Part II"  where Doc had access to the technology needed to perform a hover conversion on it. This new featured gave the DeLorean the ability to take to the sky.

What Year Was the DeLorean Used in "Back to the Future"?

Who Owns the "Back to the Future" DeLorean?

Universal Studios Hollywood held all three of the cars used for filming in storage for some time, but has since put them all to public use in various capacities.

Where Is the "Back to the Future" DeLorean Now?

The three original DeLoreans used for filming can still be seen in some form today, though they have taken a variety of paths.

For a time, the primary "Back to the Future" DeLorean was left in storage at Universal Studios, occasionally being exhibited outdoors, so fans could see it at various events. Though it was exhibited by the studio, the needed maintenance hadn't been kept up with, and it wasn't until 2010 that it was fully restored to its original glory. After its restoration, the studio permanently loaned the vehicle to a museum.

The second car was used for filming occasionally and was destroyed in one of the films. After filming wrapped, its parts were used to help build other DeLoreans used for promotional purposes. Later, the body panels would be reassembled and hung upside down from the ceiling in Plannet Hollywood Hawaii, where the shell of the vehicle currently resides.

The third DeLorean was not cared for and began to rot away in storage. Luckily, some of the car parts ended up being used on a DeLorean displayed at Universal Studios Japan. As of now, parts from the third DeLorean can still be seen on the modified DeLorean on display in Japan.

Where Can You See a "Back to the Future" DeLorean?

If you want to bring the DeLorean to life for yourself or for your kids, you can take the whole family to see a life-sized DeLorean that looks just like the one used in "Back to the Future" at the Volo Auto Museum. Our 1981 DeLorean Time Machine has been a favorite among visitors for over 20 years. 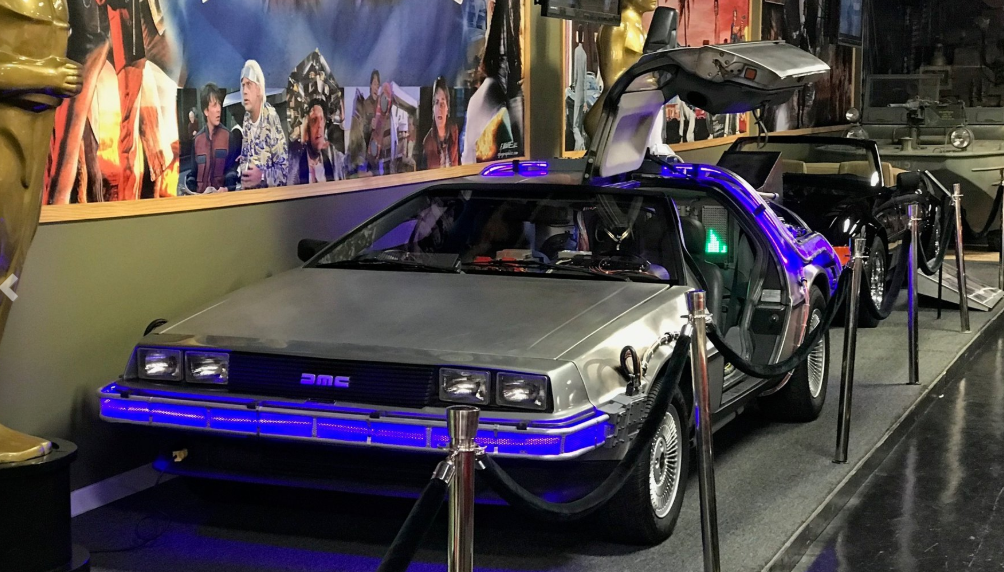 Before it was featured at the museum, it was part of the Barris Star Car Collection and was even autographed by him. As the car is one of the earliest made "Back to the Future" DeLorean replicas, you'll see an accurate reproduction of one of the most iconic movie cars ever to exist.

Start planning your trip today to see the DeLorean and a variety of other legendary vehicles housed at the Volo Auto Museum.