History of the Motorized Scooter | Evolution of Mopeds

Mopeds and motorized scooters have come a very long way since their inception in the early 1900s. Today's machines are faster, lighter and more eco-friendly. Though the popularity of scooters has fluctuated throughout the last several decades, they have remained a constant in both American and European society — but where did these scooters originate? Who invented mopeds, and what are the most popular mopeds of all time?

The Evolution of the Motorized Scooter

Humans love to challenge design. Since the invention of bicycles and automobiles, there have been constant efforts to improve and change them. The same is true of motorized scooters and mopeds. In this guide, we'll discuss the history of motorized scooters, including when they were first invented and their various uses throughout history.

Who Invented the Motorized Scooter?

Although earlier patents and drawn concepts for a similar design existed, the first commercially created motorized scooter was produced in New York in 1916 and was called The Autoped. The Autoped was the first mass-produced gasoline-powered scooter on the market. Its engine was mounted above the front wheel, and the steering column controlled both the clutch and brake. It was gasoline-powered and said to be popular among traffic police.

The Autoped could safely reach a speed of 20 miles per hour and was known to be unsteady if driven any faster. The Autoped was very popular when it was first released, mainly do the novelty of its appearance and function. It was marketed toward all walks of life, and advertisements that appeared in publications claimed one could use it for commuting to and from school or work, running errands, making business deliveries, salesmen transportation and more. It was toted as an excellent way to save time, money and energy while going about a daily routine. Only eight Autopeds are known to still exist today.

How Motorized Scooters Were Used Throughout History

Motorized scooters and mopeds are still around today and are used primarily for transportation and recreation. However, during the first several decades of their existence, they had varied applications. 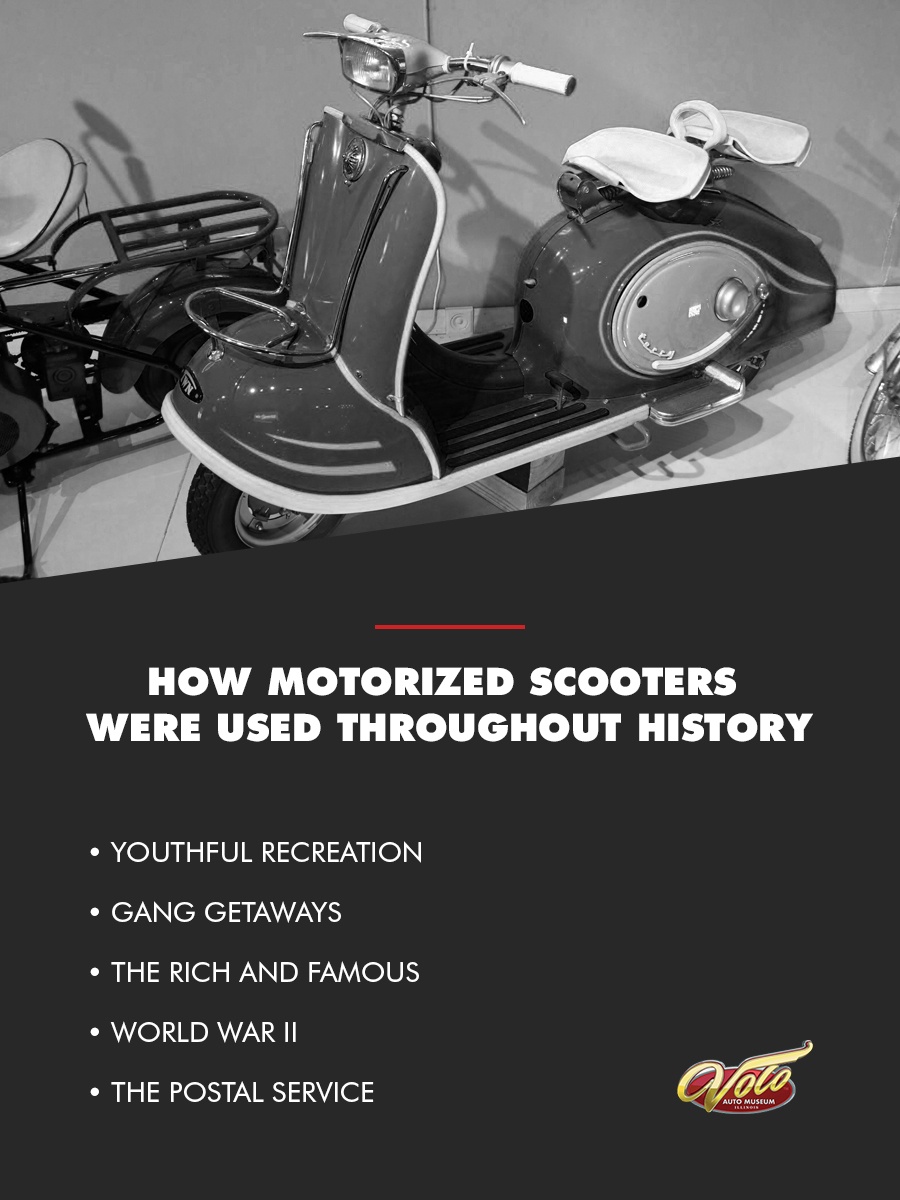 What Are the Different Types of Scooters?

Today, the terms "moped" and "motorized scooter" are used interchangeably, and rightfully so. The two machines function very similarly. That being said, they are not exactly the same.

So, what is a moped, and how does it differ from a motorized scooter? In terms of design, the most significant difference between the two machines is that motorized scooters have a step-through frame and a place to stand, while mopeds traditionally used pedals. However, in the eyes of the law, there are key differences. To drive a moped on public roadways, for example, it must be registered. Depending on the location, mopeds are typically not allowed to go faster than 25 or 30 miles per hour and must have below 50cc power.

How Many Different Types of Mopeds Are There?

There are three main types of mopeds, and they are divided by their engine size. Engine size is measured in "cc," or cubic centimeters.

These are the most common types of moped engines. However, there have been several variations throughout history. For example, many popular scooters fall somewhere in between these figures with a 75cc or 125cc engine.

What Are the Most Popular Scooters?

In addition to a 1916 Autoped, you can view the following popular vintage scooters at the Volo Auto Museum. These scooters, if not popular during their initial release, became immensely sought after by modern-day collectors and motorist historians. Many of these mopeds are rare finds, making them all the more interesting:

The Volo Auto Museum has spent years curating a collection of preserved and fully restored motorized scooters and mopeds. Our collection consists of more than 50 scooters from all around the world, including some of the earliest models produced. Our vintage scooter exhibit is ideal for motor enthusiasts, scooter collectors, lovers of antiques or anyone interested in learning more about these unique pieces of history. Bring the whole family and plan to spend the day browsing 33 exhibits and dining at our on-site pizza parlor. Schedule your group trip in time to attend one of our events or to take a seasonal train ride. The museum is indoors, so you can view exhibits any time of year, no matter the weather. We are open Monday through Friday, from 10 a.m. until 5 p.m.

If classic scooters pique your interest and you want to learn more about the history and evolution of transportation, make sure you stop by some similar exhibits, including:

Start planning your visit today to see all of these exhibits and many more.