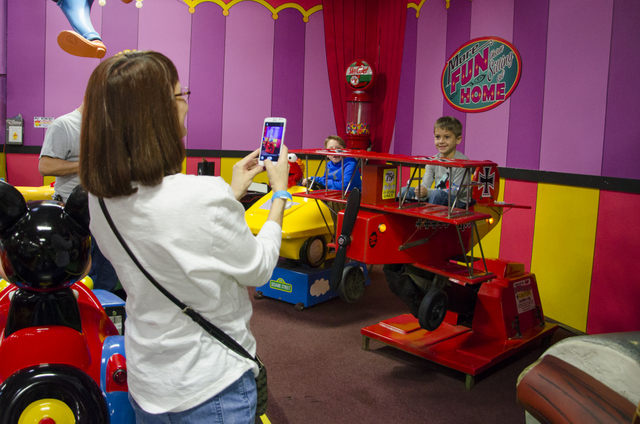 In the past several years, museum owner Brian Grams has added an antique kiddie ride exhibit, a place for families to eat pizza and view animated displays, a 1.5-ton antique music machine and an antique arcade games exhibit, among others.

This Memorial Day weekend when the outdoor section opens for the summer, visitors can also view the new Beagles animated puppet show the museum obtained from Chuck E. Cheese’s and other expanded exhibits not necessarily related to cars, but definitely related to bygone eras. The 30-minute outdoor guided trolley tours will begin Memorial Day weekend, and a new torture museum exhibit is slated for fall.

“Car museums in general are suffering,” possibly due to the many free outdoor vintage car shows people can attend, Grams said. “Pretty much every weekend in summer you can go to a free vintage car show.

“We’re trying to break that boundary of being only a car museum,” he said. “We’re now going to vintage mechanical items.” By adding family-fun activities related to bygone eras, he’s brought in a new crowd of visitors.

The museum started added new exhibits about seven years ago, he said, including mechanical music machines.

One example is the addition last year of the Mortier 91 key art deco dance hall orchestra. The 1.5-ton machine plays music revealing various instruments amid a light show. The Mortier, built in the late 1940s for a dance hall in Belgium, creates sounds with mechanical movements and real instruments. Nothing is digitalized.

The kiddie ride exhibit was added a few years ago, with some new rides open this summer, Grams said.

“The kiddie rides today are made for kids who are 5 years and younger,” he said. “They just sit there and go really slowly, like a bassinet putting a kid to sleep … But the rides made in the 1950s and 60s, many by Bally’s, were geared toward toddlers as well as pre-teens,” he said. “People love these vintage rides because they’re much more entertaining to ride than the newer ones,” he said. “They’re cooler.”

“Bally’s was one of the popular kiddie ride builders in the 50s. They made a series of different animals and vehicles. We’ve got the camel, Flipper the dolphin, an elephant. We just opened it last year. We’re continuing building on.”

The museum also has vintage scooters, including a 1916 scooter purportedly used as an escape vehicle by criminals.

One of the most recent additions is a pedal car exhibit. “They called them junior cars back in the day. They’re from the early 1900s through the 1940s.They’re basically miniature versions of real cars, like Packards and Cadillacs. They have white wall tires, working chrome headlights. They were made for a child, but the cars weren’t much cheaper than a real car, so only the wealthy could afford them,” he said.

Also at the auto museum, families can order a slice of pizza and a drink at the Show Biz Pizza exhibit, decked out like an old-fashioned pizza parlor and adorned with artifacts. They can watch animatronic shows once displayed in pizza parlors in the 1980s. One of them is a pirate show, and the latest is the Beagles, one of the first animatronic shows Chuck E. Cheeses had in the early 1980s, Grams said. Dog puppets wearing Beatles haircuts play Beatles music.

“On the other end of the spectrum, we’ve got a torture museum coming in the fall,” Grams said.

The museum will include torture implements from gangster eras and be housed in an addition to the museum. “We’re keeping it friendly. Some of these museums make it gory and bloody. We want it more historic,” Grams said.

“I think it will be popular. We’ve had people say ‘that sounds gruesome.’ And I ask, but would you want to see it? ‘Yeah, of course,’ they say.”

Sheryl DeVore is a freelance reporter for the News-Sun.