VOLO — In a back building housing excess show cars, stacks of bulging boxes and a tractor or two stand two curiously tall, sturdy tripods — hints of musical instruments, air tubes and wiring protruding from beneath their enormous, plastic-wrapped heads.

“It’s official,” said Brian Grams with no small hint of nostalgia as he pulled back the cover of a box to reveal a huge, furry paw. “All of the animatronics have been pulled from Chuck E. Cheese.”

What started in 2017 with the announcement that Chuck E. Cheeses nationwide were receiving a makeover has come to its inevitable conclusion. And Grams, at 43, is among the generations that fondly recall watching the giant, furry, robotic musicians crooning away in the family-friendly restaurants.

Now he is banking on that nostalgia to draw Gen X-ers, millennials and Boomers in for a musical encounter with an old furry friend. In recent months, the museum has spent more than $100,000 acquiring three shows — The King, King Kat and the holy grail of them all, The Rock-afire Explosion, the Aaron Fechter-creation that started it all, and subject of a 2008 documentary.

That’s right, fans. Mitzi Mozzarella, Fatz Geronimo, Billy Bob Brockali, Rolfe DeWolfe, Dook LaRue, Looney Bird, Beach Bear and Moon are in the house. It may be some time yet before they are on display, but they are here.

Already delighting visitors in the Volo Auto Museum’s food court is a completely restored trio of animatronic performing pirates from Pirate's Cove, and a set of the Beagles from Chuck E. Cheese.

The King and King Kat are two of the last characters to join the old ShowBiz Pizza Place (later rebranded as Chuck E. Cheese) entertainment lineup — and certainly the rarest. The King was a lion that impersonated Elvis Presley, while King Kat used the same structure with a new wig and costume to update to a Michael Jackson-themed character.

Grams said The King and King Kat are being restored now and will debut this winter or early in the spring. The Rock-afire Explosion, which includes eight characters on three stages and has a 40-foot-by-10-foot footprint, likely will take months, and thousands more dollars, to restore.

But it will all be worth it, according to Grams.

“For a whole lot of people out there, these animatronic shows played a huge role in their childhoods,” Grams said. “It’s where they went on special occasions, where they’d beg their parents to take them. It was the special treat for earning good grades in school. It brings back some pretty fond memories for a lot of us.

“There’s a fan community out there that has really nowhere else to go to see these old friends of theirs anymore,” he said. “We just want them to know they’re here. Some are already performing and can be enjoyed today. More are on the way. And we’re pretty excited to be the ones keeping these iconic characters alive.”

The Volo Auto Museum is located at 27582 Volo Village Road in Volo. It features roughly 400 classic, muscle and film-famous cars as well as numerous other rarities. Hours are 10 a.m. to 5 p.m. daily. Regular admission is $15.95 for adults, $8.95 for children ages 5 to 12 and free for children 4 and younger. For other information, call 815-385-3644, visit volocars.com or find Volo Auto Museum on Facebook.

2290: Volo Auto Museum Director Brian Grams looks up at one of the museum's newest, soon-to-be-restored animatronics. The museum recently bought The King and King Kat, the last of the performers added to the legendary Chuck E. Cheese animatronic bands lineup. The restaurant chain this year is completing a phase-out of the robotic bands that date back to the early 1980s. 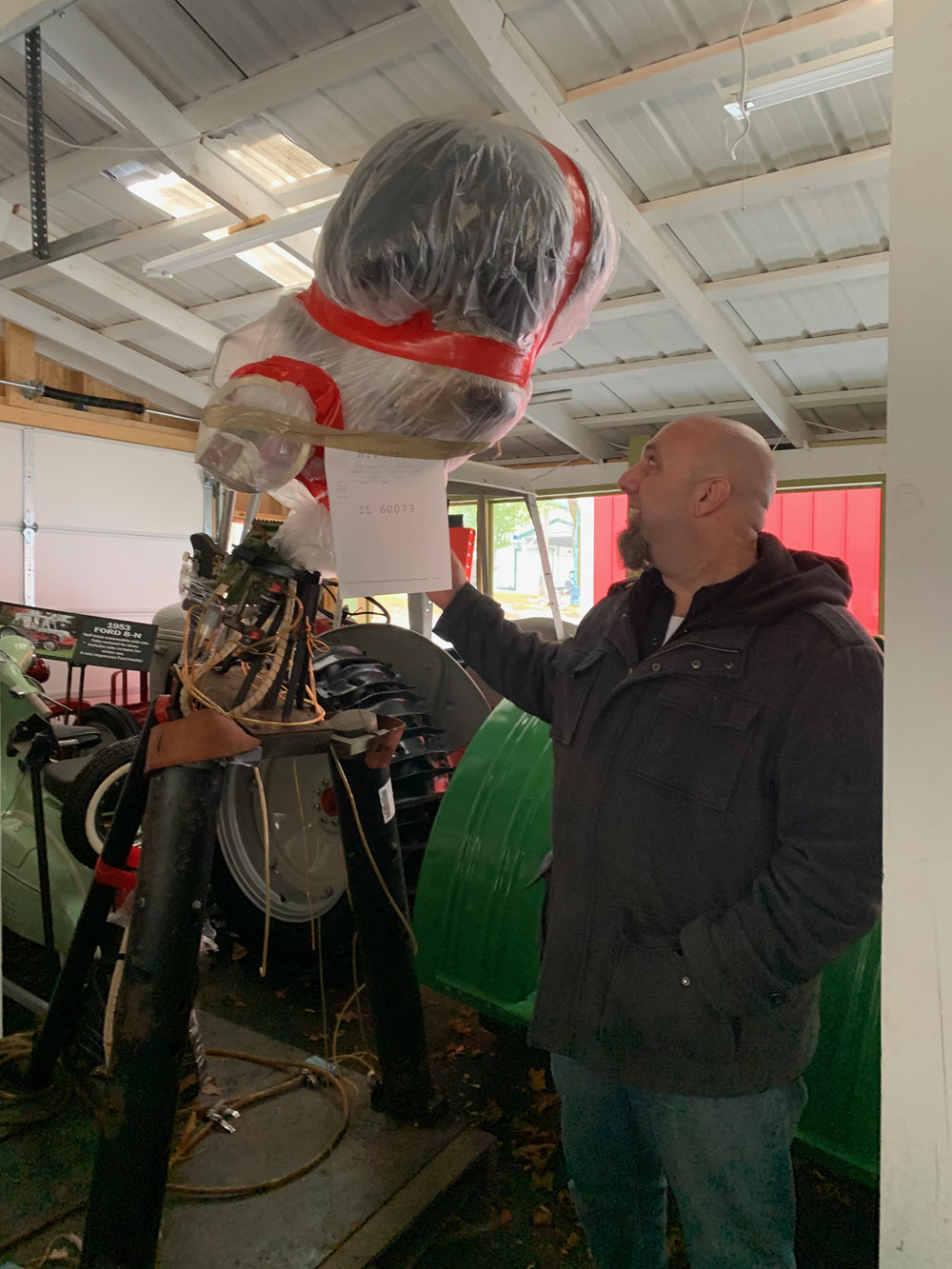