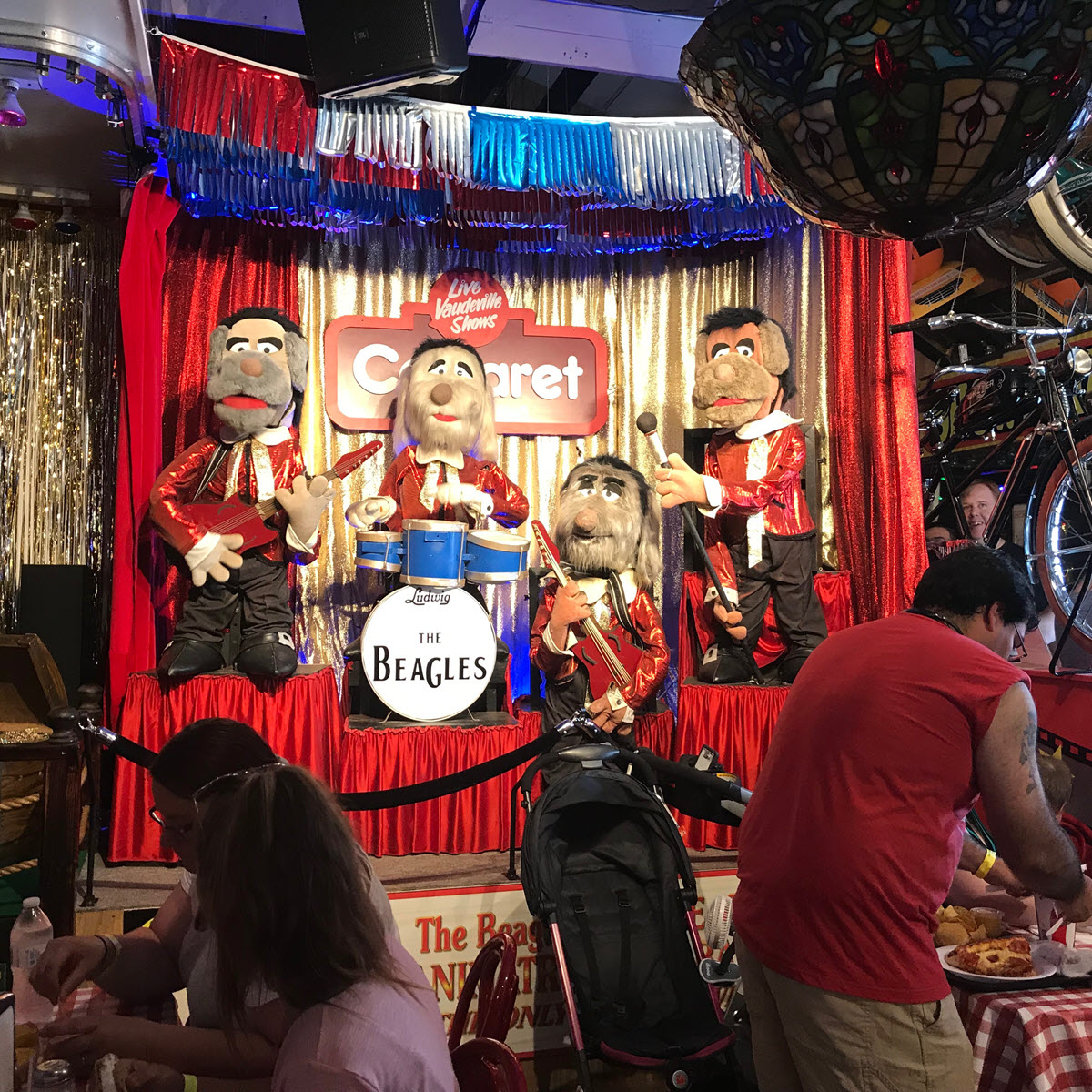 VOLO — One of Chuck E. Cheese’s first-ever animatronics shows, restored to its full former glory, is once again entertaining audiences with Beatles standards like “The Hippy Hippy Shake,” “Can’t Buy Me Love” and “Drive My Car.”

From the tip of their Beatles hairdos to the toes of their black, buckled shoes, the floppy-eared, larger-than-life robotic dogs have been meticulously pampered and preened — their mechanics fine-tuned and their instruments adjusted. Volo Auto Museum Director Brian Grams bought the longtime Chuck E. Cheese icons last fall, after a museum fan noticed an ad for the set in a Fox News cast member’s social media post and tagged the museum.

“Chuck E. Cheese opened in 1977, and this show originally was developed in 1978, so it’s one of the very first,” Grams said. “After a period of time, they changed their shows over from the Beagles, with Beatles music, to the Beach Bowzers, with Beach Boys music. Ours had the Beach Boys music, but also their original Beagles hairdos and outfits.”

Grams hired a trio of electronics, sound and movement technicians to restore The Beagles, and to synch them back up with Beatles tunes. The lineup presently includes “Back in the USSR” and “I Saw Her Standing There,” and likely soon will feature “Birthday” as well.

“We’re all about memories,” Grams said, noting that many adults, himself included, fondly recall seeing the animatronics shows during childhood trips to the Chuck E. Cheese franchise.

“It’s a way of sharing something from my childhood with my kids’ generation,” Grams said.

Kassandra Kincaid seemed to appreciate the decision. The infant giggled on her mother’s lap as her 3-year-old sister, Kylee, watched The Beagles wiggle and croon over Father’s Day weekend — the band’s museum debut. “My baby’s only 11 months old, and look at her smiling at them,” said the girls’ mother, Mary Kincaid of Chicago, who was visiting with her husband, Keith.

The Volo Auto Museum is open 10 a.m. to 5 p.m. daily. It features roughly 400 classic, muscle, Hollywood cars and more. Regular admission is $15 for adults, $9 for children ages 5 to 12 and free for children 4 and younger. For other information about The Beagles, other animatronics shows or any of the museum’s many collections, call 815-385-3644, find Volo Auto Museum on Facebook or visit volocars.com.

After a monthslong restoration, The Beagles once again are performing for appreciative crowds. These former Chuck E. Cheese animatronic crooners now are on stage in the Volo Auto Museum's own Show Biz Pizza Place. See and hear them perform Beatles music sets during museum hours, 10 a.m. to 5 p.m. daily, at 27582 Volo Village Road.