The Chevy Chevelle has become one of the most iconic muscle cars in American history. The vehicle has been so popular, that it's shown up in over 1,600 movies, such as "The Fast and The Furious" and "Jack Reacher," staking its claim as Hollywood's go-to muscle car. Though you might recognize the vehicle for its powerful, adrenaline-pumping qualities, you might not know that it also was a family favorite for its station wagon and sedan models.

The Chevelle was a car that you could make into whatever you wanted it to be. Find out more about the history of the Chevy Chevelle, along with some of the most popular options that you can still get your hands on today.

What Year Did the Chevy Chevelle Start?

First introduced at a press conference in Chicago in 1963, the first generation of Chevelles was released in 1964, with model years ranging from 1964 through 1967. So, where did the name Chevelle come from? The truth is that no one really knows. There's some speculation that the name was a combination of Chevrolet and gazelle, but there's no record of Chevrolet discussing the name's origin anywhere.

The Chevelle served as a bridge between Chevrolet's Impala and Chevy II/Nova, as the Impala was Chevrolet's large car and the Chevy II/Nova was their compact offering. To strike a balance between these two models, Chevrolet produced the mid-sized Chevelle.

Besides Chevy wanting to create a mid-size option for customers not interested in a compact or large car, they also produced the Chevrolet to provide some competition to the Ford Fairlane, which was one of the most popular mid-size models available to consumers. Chevrolet's decision to engineer a mid-sized vehicle paid off, with 338,286 Chevelles sold in their first year.

Overview of the First Generation

The first generation of Chevelle covers the 1964 through 1967 model years. Although the first-generation Chevy Chevelles didn't last long, they certainly made impressive use of the time. The Chevelle's body styling came in a two-door hardtop, known as the Sports Coupe, or in a convertible model. Surprisingly, the Chevelle also released a few four-door sedan models, as well as releasing two or four-door station wagon models.

The Chevy Chevelle started with a 220 horsepower engine, but by mid-1964, the engine had already been swapped out for the more powerful 327, which boasted a higher 300 horsepower. This change in engine signaled Chevrolet's commitment to positioning the Chevell as a high-performance vehicle.

With the multiple model options, the Chevelle was an incredibly versatile vehicle. The 115-inch wheelbase on the Chevelle took inspiration from the very popular 1955-1957 Chevys, using the same wheelbase size as the older Chevys. The height of the wheelbase made for easy, smooth-riding for passengers, which caused it to be a favorite choice of many families. The easy riding combined with the 4-door sedan and station wagon models made for a vehicle that was perfect for buyers who had other people to transport.

Besides being family-friendly, the Chevy Chevelle also quickly appealed to buyers who were looking for something fun to drive that could be displayed proudly outside their home. The two-door sports coupe and convertible models enticed drivers looking for a powerful muscle car. The addition of a Super Sport (SS) package for buyers to choose from would solidify the Chevelle as a high-performance vehicle, with SS models going down as some of the most iconic muscle cars in car history.

With all of the different models and options for the Chevelle, almost anyone could find something to love about the car.

The SS package for the Chevelle would quickly become a favorite of those looking for a high-performance muscle car. Those who chose the SS package got a variety of additions that included:

Besides these features of the package, the original SS came with an unimpressive, 283ci V8 that only supplied 220 horsepower to the vehicle. With hot competition from other muscle cars, the Chevelle would add a 327ci small-block Chevy engine that offered a much stronger 300 horsepower. In 1965, the SS would get an upgrade to its power, with a new L79 350hp engine becoming standard for that year's Z16 model.

Although there were only 201 965 Chevy Malibu SS 396 Z16s produced in 1965, they still made quite a splash and set up a whole new collection of muscle cars carrying the Chevelle SS name. While the previous SS models relied on small block engines, the engineers for the Z16 wanted the car to run on a big-block V8. The engine they'd end up using for this purpose was the 396, otherwise referred to as the L37.

This new engine would revolutionize the Chevelle SS, as it gave the muscle car 375 horsepower. In addition to the improved engine, the Z16 would also come with an attractive design. The vehicle would borrow the Chevelle convertible's box-style frame, while also incorporating the power brake system and imposing rear axle of the Impala.

Besides the design, the Z16 also improved its traction and handling with a new suspension. To give drivers more customizability, Chevrolet made it so that the car came with a Muncie 4-speed transmission. Along with improving the performance, this version of the SS arrived with front and rear seatbelts, a 160mph speedometer, padded dash and AM/FM radio. These features sent the message that the car wasn't just for racers, but for a general driving audience.

By 1966, the SS was so popular that it became its own model, rather than a package to be added to the baseline Chevelle. The trim options for the SS would decrease, with 283 and 327 engines dropped entirely. The 1966 SS would keep the 396 engine, however, giving buyers the option to get horsepower levels between 325 and 375. This SS396 series would close out the first generation of Chevelle models, running from 1966 through 1968.

Second Generation of the Chevy Chevelle

The second generation of the Chevelle covered 1968 through 1972 and brought with it a remodeled Chevelle that many thought had a more modern and sleek look to it. Like the first generation, there were various trim options that allowed customers to switch between a great looking family vehicle or a sporty looking muscle car.

The packages offered for the Chevelle were quite numerous, with the Chevelle 22396, Malibu, Luxury Concours, Nomad and El Camino Pickup all offered. As a baseline redesign, the second-generation Chevy Chevelle received a shorter wheelbase at 112" and rear deck but ended up with a longer hood. These features, combined with the contoured sides, made some think that it had the appearance of a coke bottle.

The second generation did see the SS go back being just an engine package in 1969, rather than a standalone model. Vent windows were also removed on the cars. Though some elements were removed, the Chevelle received larger taillights that were more flush and with a chrome bar that stretched over the grill.

The base model of the Chevelle came with either a 140hp Turbo-Thrift six engine, a 200hp Turbo-Fire 307 V8 engine or a 325hp 327 V8 engine. The variety of the Chevelle carried over from the first generation, with plenty of engine upgrade options available. For example, the SS396 came with a 396 cubic inch Turbo-Jet V8 engine that had 325 horsepower, with the possibility to upgrade to 350 or 375 horsepower engines for an extra charge.

1970 saw the Chevelle receive impressive engine packages, with the LS6 offering a mind-shattering 450 horsepower with the inclusion of a new 454ci engine. Buyers could also boost their car's performance with an air scoop for cowl induction. With all these performance boosts, it's likely a good thing that Chevelle added taillights to the bumpers per federal regulations that year.

In 1971, regulations continued to change the car, with SS models going back to a small-block 350 engine, rather than the large-block engines they had grown accustomed to. This was largely due to a crackdown on gas-guzzling vehicles. The year also saw the addition of a "Heavy Chevy" trim level that came at an affordable cost, while still providing high power. The vehicle would not change much in 1972, with the year largely being a carryover period before the third generation released.

What Was the Last Chevy Chevelle?

The Chevelle line came to a somewhat anticlimactic end in 1977 with the release of the 1977 Chevrolet Chevelle and Malibu series of cars. At that point, big-block engines had already been discontinued, and the performance from the last Chevelle Malibus was nothing to write home about. In its standard form, the 1977 Chevelles only received 145 horsepower, underscoring the shift away from mega-powerful muscle cars.

So, what happened to the Chevelle?

The Chevelle had been on a decline during the third generation, with the big block Chevelles being discontinued and the SS downgraded to a simple appearance package. Since Chevrolet started to refer to their mid-size cars as Malibus in 1978, 1977 was the last year that Chevrolet gave models the Chevelle name. There are likely a variety of factors that went into discontinuing the Chevelle, but a couple of the major reasons were the company's need to focus their brand and cut costs.

Here are some of the most commonly asked questions about the Chevy Chevelle: 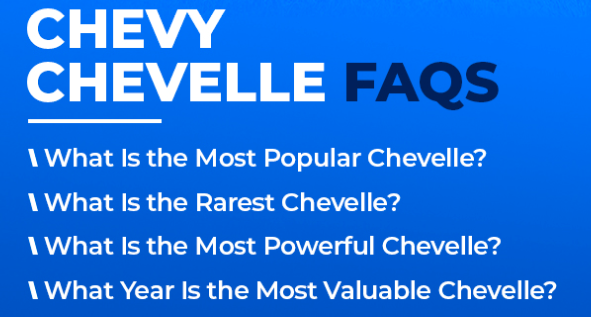 What Is the Most Popular Chevelle?

As collectors' tastes change and are varied, there is not a specific model that is considered the most popular. However, those in the Chevelle community will point out models like the 1968 SS 396, 1969 COPO 427, 1965 Malibu SS 396 Z16 and 1964 Malibu SS L76 as some of the most sought after models. Ultimately, with all of the models and packages offered for these vehicles, there's going to be a lot of mixed opinions on which one is the most popular.

What Is the Rarest Chevelle?

The rarest Chevelle is the 1970 Chevrolet Chevelle SS 454 LS6 Convertible — some believe that less than 20 were ever produced. However, since Chevrolet hasn't shared any fully-detailed production numbers, the production number isn't confirmable. Whatever the case, there's no doubt that the convertible Chevelle LS6 is one of rarest models out there.

What Is the Most Powerful Chevelle?

What Year Is the Most Valuable Chevelle?

Find Your Dream Chevelle at Volo 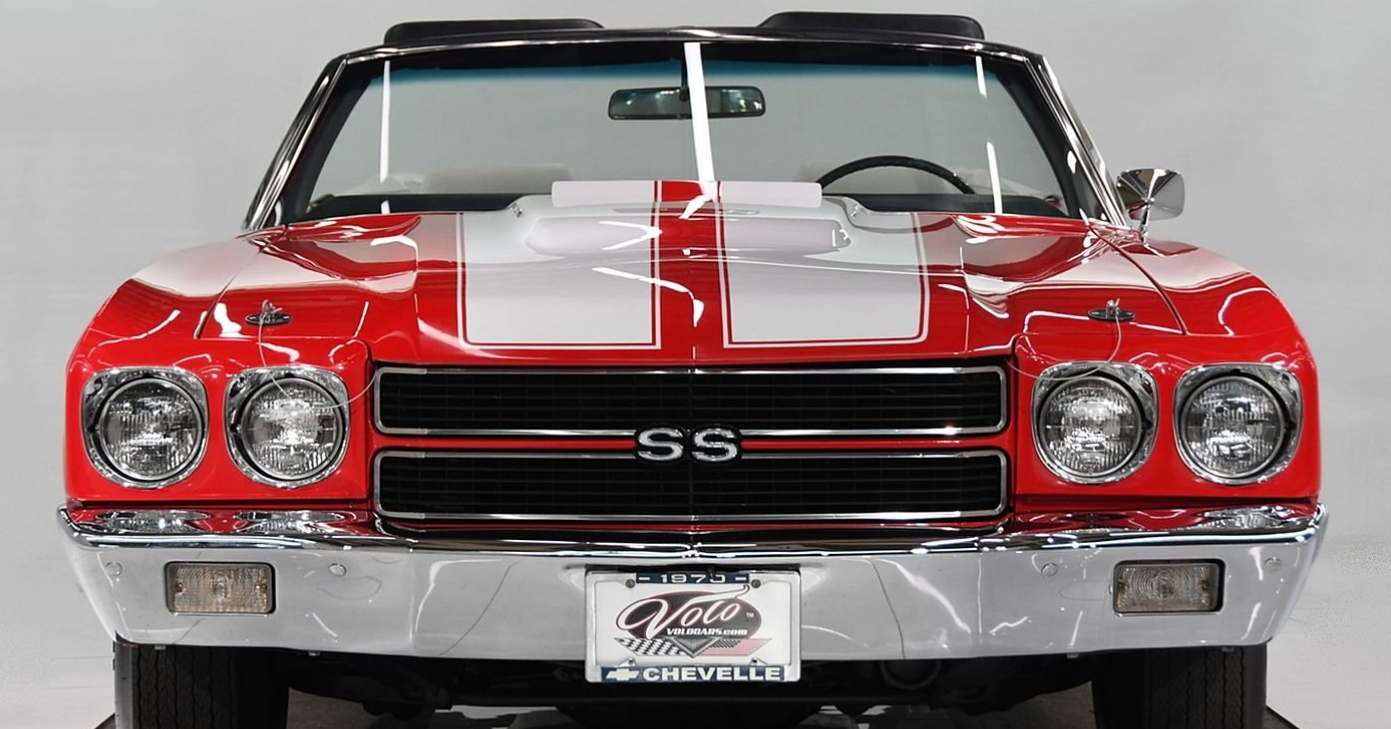 If you love the Chevelles and wish you could get your hands on one, you're in luck. At Volo Museum Auto Sales, we're proud to offer a variety of Chevelles that will satisfy even the most hardcore Chevelle enthusiast's needs. Check out some of our top options:

Browse our selection of Chevelles to find more options available to you. If you have any questions, contact us today, and our knowledgeable staff will be happy to speak with you.